A two-word tip for success in the travel industry

Posted on November 19th, 2012 by John Frenaye in Editorial Musings

Wouldn’t it be nice if owning a business came with a foolproof plan for success?  Just imagine if there was a document to which you could refer when you went astray to put you back on course. Or, if you are already successful, imagine a document to keep you on track for years to come. Well, to my knowledge, no such document exists; however, I can give you a single, two-word, tip that might do the trick.

We are all agents, and we are all consumers. We know that things will not go as planned 100% of the time. As I have said before, we almost expect mediocrity today! For me, I rarely look for any kind of remuneration or reimbursement—I simply want my issue to be acknowledged and followed up upon so it hopefully does not happen to someone else.

Recently, I stayed at a conference resort hotel, which bills itself as a “luxurious” property. I have to admit, the facilities were top notch. The pricing (as expected) was also top notch. The food was very good as well. Where they stumbled was in their service—but more specifically, their lack of response to my concerns.

I am not a demanding traveler. I look for a safe and clean room; and not too much else. When I arrived and started to unpack, my dresser drawer was home to an empty condom package. I thought to myself, “no big deal, the housekeeping staff just missed this drawer” and I threw it away.

The following morning, I walked into the lobby coffee shop and asked for a hot chocolate. The “barista” looked at me like I was from Mars and advised that he would need to go in the back to see if they could do that. Last time I checked it took Hershey’s syrup, milk and a microwave.

The following morning, I wanted to have breakfast before my meeting. It was about 9:30am in an 1800 room resort with about 25% occupancy. I was told that there was a 25 to 30 minute wait for a table. I passed.

After the event, I needed a bellman to help with some equipment. I called the bell desk to make the arrangements and was told someone would be “right down.” 10 minutes, 20 minutes, 30 minutes. I called again and asked them how long “right down” meant? I was told that they were busy because this was the time most people check out. I am not sure why they were not prepared for this as check-out time is at noon. I was told he was on his way down “now.” 35 minutes, 45 minutes—I struggled with the gear and left on my own.

After paying the Valet for my car, I wanted to get a soda for the ride out of town. I stepped into the gift shop where a resort employee was attempting to return an item he had purchased. He and the clerk argued about who would owe whom money in the end—apparently the employee did not have money and was planning to return his prior-purchased goods to pay for his new stuff.  After about 20 minutes of this haggling, I left.

While none of these missteps alone are necessarily horrible, together they paint a different picture.  When I discovered the condoms, I called the front desk to let them know to have housekeeping check more thoroughly. When I could not get hot chocolate, I asked the front desk where I could go since they were not able to handle the request—they did not know. When I questioned a half hour wait when I tried to get breakfast, the hostess shrugged her shoulders. 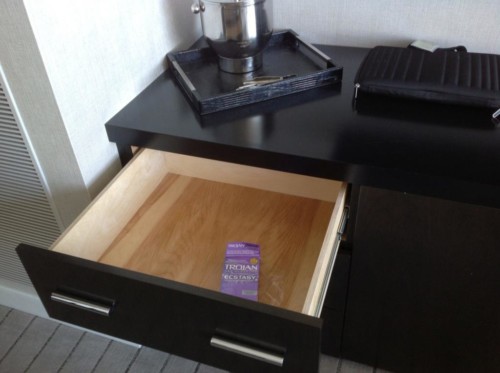 When I got home, I called the resort and wanted to talk to someone about the issues. After 23 minutes on hold, I hung up. I went to their website and submitted my issues via their “contact us” form.  I was polite. I laid out the issues. I stressed I only wanted to have them acknowledged and hopefully avert a repeat performance for another guest. I was not looking for money back, a free night, some gambling money, a free meal or a limo to the airport. All I wanted was an acknowledgement. And now, almsot 60 days  later, all I have to show for it is the empty condom box!

On the other hand, I have not been hesitant about telling my story on Twitter, Facebook, Yelp, Trip Advisor and now here.  I am not sure what impact my negative opinion might have, but it is a shame that it is out there at all—when all I wanted was an acknowledgement.  “Mr. Frenaye, we are sorry that we did not meet your expectations. We will discuss your issues with the appropriate department and hopefully you will give us another chance because I know we can do better.” That, would have worked perfectly!

Today, it does not take much to appease a disgruntled client. As you navigate through your own travel business, you are bound to have people call you with both praise and criticism. You need to take the good with the bad and the sweet with the sour. When someone comes to you with an issue (real or perceived) simply acknowledge it—that is likely all it will take to appease him or her.  If not, have a discussion and find out what it will take—and if reasonable, work with your other travel partners to make it happen.

PS: And no, I am not going to disclose the resort.