The Challenges of Being a ‘Vegabond’ | TravelResearchOnline

The Challenges of Being a ‘Vegabond’

Posted on September 19th, 2013 by Lyn Edwin Cathey in Soundings

A big health and weight challenge for me is that I’ve always used travel as an excuse to abandon the diet-du-jour and eat anything and everything, even from the inflight beverage cart. I’ve since developed healthier habits and strategies to overcome these tendencies. A survey of the agent community has also generated some useful advice.

The wake-up call came two years and twenty five pounds ago when I awoke from a dream…actually a nightmare… trying to shake off feelings of shame and self-loathing. In my dream, a smirking flight attendant was asking me if I needed a seatbelt extender. All passengers within earshot were laughing at my embarrassment and, of course, they all looked like triathletes with body fat percentages of negative twelve. I decided that very morning to get serious about losing weight and eating healthy, especially when traveling.

So I became a vegetarian, thinking that by not eating meat I would lose weight. Wrong. Quitting meat became an excuse to eat more pizza and ice cream.

Things got worse. The digital bathroom scale – the one that used to display just a number – began whispering “Come back later…alone”. 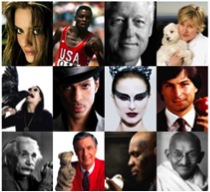 A little research rekindled my motivation (see documentary list below) and revealed a surprisingly long list of famous vegetarians. I’m not sure if these people were frequent t

Here’s a shocker. Ozzy Osbourne, the heavy metal rocker and lead singer of Black Sabbath – the same guy who used to bite the heads off live bats on stage – is now a vegan!*

*The distinction: Vegetarians eat no meat. Vegans eat no animal products at all; dairy, eggs, etc.

Former President Bill Clinton is another high profile vegan. He made the diet change only after quadruple-bypass surgery. Clinton grew up in my newly adopted hometown of Hot Springs, AR. He was a regular at McClard’s BBQ on Albert Pike Blvd in Hot Springs. (I don’t mean to imply that eating at McClard’s caused Clinton’s heart disease, but they do offer a coupon good for a free angiogram when you pay your tab.)

Here’s a tip from a fellow agent, one for juicers: Because it is small enough to fit snuggly in roll-aboard luggage, she suggested “the Magic Bullet” as a travel substitute for a home juicer. (Standard home juicers are much too large to pack for travel. The produce input thingy by itself is large enough to accommodate whole tomatoes, apples, etc., so large, in fact, I was once tempted to juice a salami. Meat flavored health shake, anyone?)

But even the Magic Bullet is no magic bullet, figuratively speaking. So what do experienced ‘vegabonds’ recommend? Eat selectively, pack wholesome organic food to take with you and seek out vegetarian, vegan and organic offerings along the way. And there are times when you just need to stay hungry when access to nutritious food is lacking. (Not what you wanted to hear, I know.)

Need a little kick in the pants to stay motivated? Watch these documentaries: ‘Forks Over Knives’, ‘Vegucated’ and ‘Fat, Sick & Nearly Dead’ (my favorite). The author and subject of the third documentary sticks to a 60 day fresh vegetable juice fast while traveling the US coast to coast. All three are available on Netflix.

Don’t think for a minute that ‘vegabonding’ means denying one’s self the pleasures of fine dining. I recently enjoyed a fantastic vegetarian meal in the Nectar restaurant at Hilton Wine Country in Santa Rosa, CA. (Here’s how my entrée was described on the menu – “Pan-Seared Zucchinni and Millet Cake Burger – Grilled Portobello Mushroom with Oven-Roasted Tomatoes, Frisée and Roasted Red Pepper Ketchup”.)

Other resources for diet conscious travelers – the website HappyCow.net offers a downloadable app for iPhones and Android phones for locating vegetarian and vegan establishments while on-the-go, but I have yet to give it a try. Anyone had experience with this service.. or know of similar ones?

Meanwhile, a hearty bon appetite and happy, healthy ‘vegabonding’ to you all.

One thought on “The Challenges of Being a ‘Vegabond’”

Share your thoughts on “The Challenges of Being a ‘Vegabond’”