Quantum of the Seas Recap | TravelResearchOnline

Quantum of the Seas Recap

Posted on November 20th, 2014 by Ralph Grizzle in Deck Plans 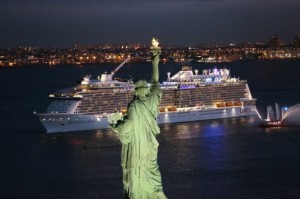 Royal Caribbean’s Quantum of the Seas sails past the Statue of Liberty in New York on the evening of Wednesday, November 12, 2014. Photo courtesy of Royal Caribbean.

The truth of the matter is that two days is not nearly enough to experience everything you can possibly do aboard Royal Caribbean’s new Quantum of the Seas. In fact, two weeks might not be enough. She’s not just a cruise ship that takes you from Point A to Point B; she’s a destination in her own right.

After just shy of 48 hours onboard, that’s my takeaway from Quantum of the Seas: she could do circles in the Atlantic for seven days and her passengers likely wouldn’t complain. There’s too much to do and see right onboard this 168,666-gross-ton ship that is 1,141 feet long, 136 feet wide, and has 16 passenger decks. In fact, you’ll barely notice you’re sailing with 4,180 other guests.

Here’s a look at some of our favorite features onboard: 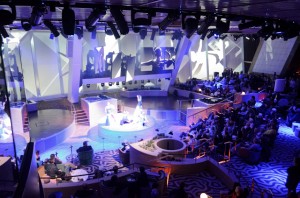 Is Two70 the best feature on Quantum of the Seas? It very well could be. Photo © 2014 Aaron Saunders

Without a doubt, Two70 was the highlight of my Quantum of the Seas experience. By day, the area functioned as a spectacular aft-facing lounge that recalls the same kind of grand scale that Royal Caribbean has used in the past for its main dining rooms. By night, Two70 featured entertainment that was innovative and imaginative — a complete departure from cruise ship entertainment as you may know it. 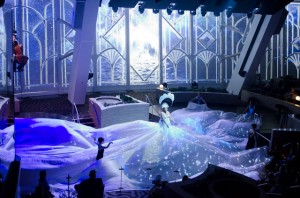 Original shows and high production values make for some of the most innovative entertainment at sea. Photo © 2014 Aaron Saunders

The production values alone are staggering, with a list of technical and creative credits that reads like a feature film. In addition to Starwater, which I enjoyed, Two70 will also offer Virtual Concert and Sonic Odyssey: original shows designed by Royal Caribbean Productions and Montreal-based Moment Factory. I’d sail Quantum again just to see them. 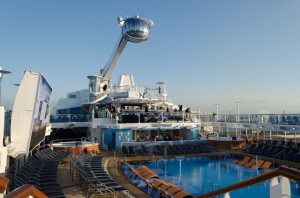 There’s no getting around it: NorthStar is just plain cool. Photo © 2014 Aaron Saunders

Yes, the London Eye-esque NorthStar capsule was a winner, and it will be for you too, even if you plan to only ride it once. NorthStar gives you a perspective of your cruise ship that has, until now, been impossible to obtain. It will also no doubt turn heads when she sails to the Caribbean in a few weeks and Asia in 2015. 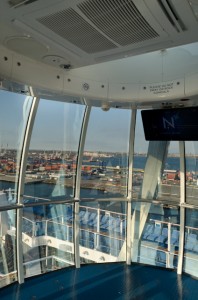 Even better, North Star can operate while the ship is at sea – something I had my doubts about. It’s also free – unless, of course, you’d like to get married on the NorthStar. You can do that, but for a fee. 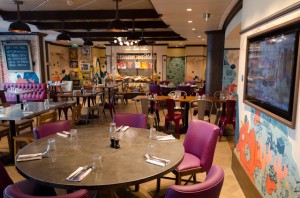 There are plenty of free and pay dining options onboard Quantum of the Seas. Pictured here is Jamie’s Italian on Deck 5 aft. Photo © 2014 Aaron Saunders

I’ll be the first to admit that I thought Royal Caribbean’s main dining rooms were some of the most beautiful afloat. Grand and sprawling, the main dining room on Mariner of the Seas still stands as one of the nicest I’ve ever been in. But although these large grand rooms are gone, Quantum of the Seas has something better: a multitude of more intimate venues featuring unique menus and décor. 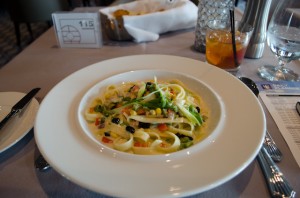 I didn’t get to try a lot of the dining venues during my two days onboard, but of the ones I ate at (American Icon Grill, The Grande, Silk, and the Windjammer Marketplace), Silk was my undisputed favorite both in terms of ambiance and cuisine. 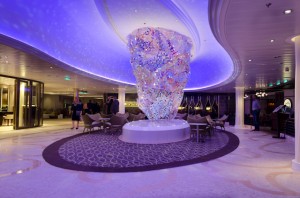 Quantum’s interior design and decor is surprisingly elegant and soothing. Shown here is The Via, Deck 5 aft. The lighting changes colors depending on the time of day. Photo © 2014 Aaron Saunders

Quantum of the Seas absorbs her guests better than the Voyager and Freedom-class ships. On a cruise aboard Mariner of the Seas a few years back, getting a seat in the Schooner Bar or the Café Promenade was damn near impossible at the best of times. 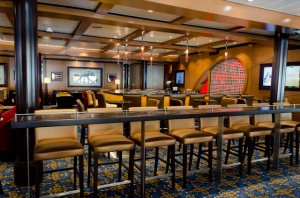 On Quantum of the Seas – which sailed nearly full during my previewl – the increased multitude of bars and lounges helped to distribute guests better than her predecessors. Coupled with the fact that most entertainment venues are spread across Decks 3, 4 and 5, the next alternative is only steps away if your favorite watering hole is full. 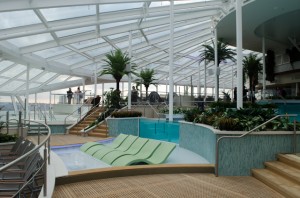 The Solarium on Deck 14 overlooks the bow of Quantum of the Seas. Photo © 2014 Aaron Saunders

This stunning space could almost do double-duty as the “new” Viking Crown Lounge. Situated at the bow right above the navigation bridge, this area is part pool, part relaxation area, part bar and lounge. The views from here were unparalleled. My biggest concern was that Quantum of the Seas would have a lack of connection with the sea. It connected well. 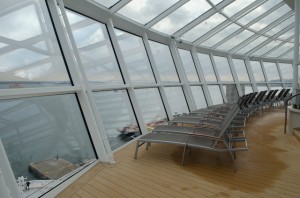 The Solarium offers an awesome connection to the sea. Photo © 2014 Aaron Saunders

The Solarium, in fact, is all about the ocean and the sights around you.

So who is Quantum of the Seas right for? As it turns out, there are plenty of people that will probably find something to enjoy about sailing aboard Royal Caribbean’s latest ship. 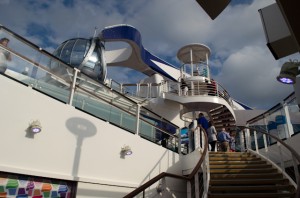 Climbing up to the North Star. Photo © 2014 Aaron Saunders

Sail Quantum of the Seas if:

Avoid Quantum of the Seas if:

Share your thoughts on “Quantum of the Seas Recap”