Posted on February 13th, 2015 by Ralph Grizzle in Deck Plans

There’s nothing more rewarding after a marathon of red-eye flights than seeing an enormous cruise ship looming over you – and knowing you’ll soon be stepping onboard. That was the situation I found myself in this afternoon as I stood at the Port of Miami, ready to embark on my very first cruise aboard MSC Cruises’ MSC Divina. 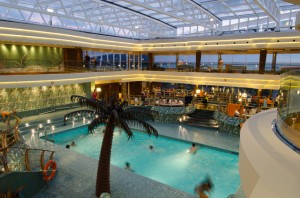 Welcome Aboard MSC Cruises’ MSC Divina as she prepares to set sail from the Port of Miami for the Eastern Caribbean! Photo © 2015 Aaron Saunders 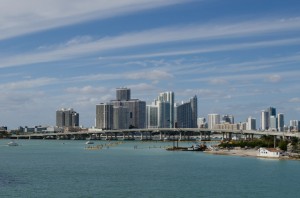 We embarked MSC Divina in the cruise capital of the world, Miami, Florida. Photo © 2015 Aaron Saunders 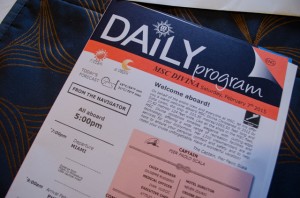 At over a thousand feet in length, MSC Divina is a Very Big Ship. My last cruises have all been aboard Very Small Ships, which I love dearly. But I cut my teeth, so to speak, on megaship cruising, and there’s always something exciting about coming back onboard a massive cruise ship.

Embarkation took no time at all, and I have to give the porters at the Port of Miami credit for stating that tips are purely optional. That’s a nice touch; in the old days, it was assumed that if you didn’t tip, your bags might end up in the drink. No more. It was a kinder, friendlier Port of Miami – the experience of which continued throughout the document verification, security, and check-in process. 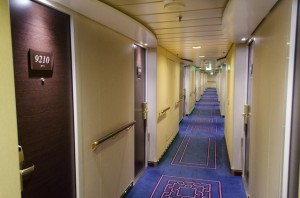 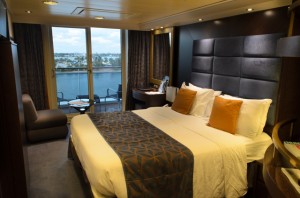 My home for the next seven days: one of MSC Divina’s 1,125 balcony staterooms. Photo © 2015 Aaron Saunders

When I arrived shortly after noon, embarkation had already begun – but the process of stepping aboard MSC Divina was deceptively simple. Sure, there was plenty of queuing, but that’s to be expected on any megaship. Still, from curb to check-in, I stepped off the gangway and onboard my massive cruise ship in just a little over thirty minutes. 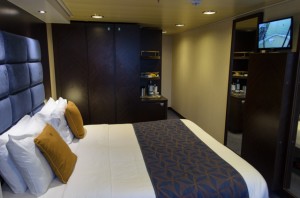 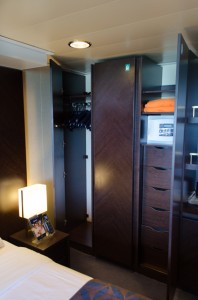 …and feature a decent amount of storage space. Bonus points for the closet with the six small drawers in it! Photo © 2015 Aaron Saunders

For the next seven days, my home will be one of MSC Divina’s Balcony Staterooms on Deck 9. There are a whopping 1,125 of these onboard, all of which measure between 182 and 317 square feet – generous to be sure for mainstream cruise ships.

Aside from the attractive décor done in shades of dark woods and sea blues, it’s a very spacious, practical stateroom. Electrical outlets are provided for both European and North American plug types, with two of each situated just above the desk. The spacious closet is chocked full of hangers; no need to request more here. And, as a bonus, a wall of drawers topped by a safe complements the closet. This is a truly nice touch; one I typically only see on luxury cruise ships or river cruise vessels. 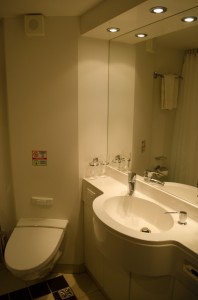 The spacious feeling continues in the bathroom, which features a full-sized bath and shower combination; another rarity among new cruise ships of this size. Plenty of shelving space is available, and my only complaint with the room is that it’s so white. On any other ship, this wouldn’t be an issue – but on MSC Divina, colour ebbs and flows throughout every public space onboard. White just seems so…plain…in comparison. 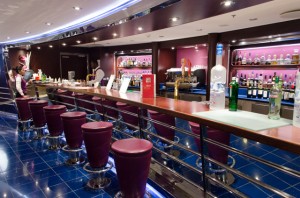 MSC Divina’s public rooms are bold, confident and unique. The onboard atmosphere changes with each room, which is quite striking. Photo © 2015 Aaron Saunders

MSC Divina is, without a doubt, one of the most beautifully-designed ships I’ve ever laid eyes on. Each public room has its own distinctive décor and personality, and no two rooms are alike. This creates enormously personalized spaces interconnected by common corridors that weave and flow from one area to the next. Passenger flow is fabulous, with very few bottlenecks, even on our busy embarkation day that also featured numerous visitors; guests from MSC’s parent shipping company eager to embark on MSC Divina for a quick tour and lunch. 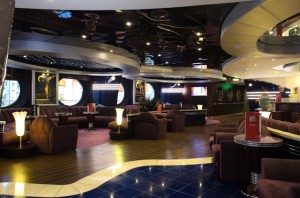 Because embarkation day can be a bit chaotic – and because I am seriously jetlagged – I’m going to cheat a bit. Rather than write a full report, I want to share with you 10 things that have impressed me about MSC Divina so far:

1. International Passenger Mix: This isn’t your father’s Caribbean cruise. Instead of being homogenous to the point of distraction, MSC draws a wide mix of people from around the world to both the MSC Divina and the Caribbean. So far, I’ve heard English, French, German, Italian, and Spanish being spoken onboard – and that diversity is a huge plus in my books. 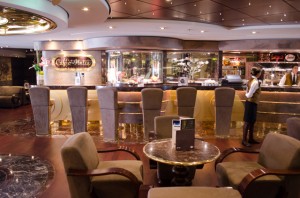 Fancy a coffee? The Caffe Italia on Deck 7 is the place to be. Photo © 2015 Aaron Saunders

2. Live Music: In an age where many mainstream lines are scrapping live evening music entirely, MSC goes against the grain. Tonight, seven separate artists are performing aboard MSC Divina for the listening pleasure of guests. In fact, as I write this in the Segafredo Coffee Bar sipping an Irish Mojito, I’m listening to the sounds of the Amsterdam Trio emanating from the multi-story atrium just a few feet away.