Posted on May 5th, 2015 by Elizabeth Cody in Outposts

Always known for its culture, elegance, and exquisite gardens, Sūzhōu is the epitome of the Chinese virtues of balance and harmony. Originally the capital of the kingdom of Wu, today Sūzhōu is an economic powerhouse along China’s Yangtze River Delta. While modern progress has taken its toll on some of its natural beauty, the city still has plenty of gardens, museums, and temples to entice you. 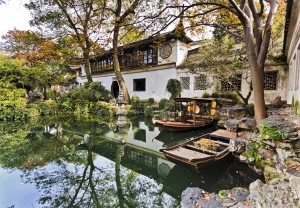 Originally built in the Ming dynasty, the Lingering Garden spreads across almost 7 1/2 acres with winding corridors, ponds, and bamboo. The garden was commissioned by a doctor to help his ailing patients, and stone tablets can still be seen where the patients recorded their experiences in the gardens. Today the gardens are also home to a tea house that is a quiet place to recover from the hustle and bustle of the city, and sip a cup of longjing tea. The name “Lingering Garden” is very appropriate, since you will have a hard time tearing yourself away from this beautiful and tranquil place!

Nicknamed the “Venice of the East”, Tongli Water Town is a town on the outskirts of Sūzhōu with a series of canals winding through the town. The town has also been popular with Confucian scholars, poets, painters, and government officials in the past. Tongli is built on seven islands, created by five lakes and fifteen rivers that feed into the canals, and 55 bridges create links between the islands for its 33,000 residents to access. Three of the bridges, Taiping, Jili, and Changqing, are unique, and it is considered a blessing to cross over them on special occasions such as marriage, the birth of a child, or a birthday. Tongli has its own famous garden, the Retreat & Reflection Garden, built between 1885-1887 and a UNESCO World Heritage site, along with many other Sūzhōu gardens. 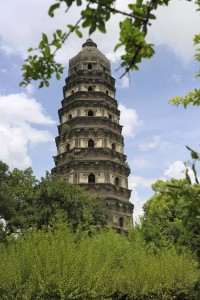 Built over sixteen years and taking a boatload of silver to complete, the Humble Administrator’s Garden is the largest of the gardens in Sūzhōu. Taking almost 30 years to complete, the garden is a maze of bridges and pavilions set around a large lake. The garden is divided into three major parts: the central, east, and west, and has 48 buildings with 101 tablets, 21 rare and precious trees, and over 700 penjing miniature landscapes. This is one of the most picturesque places to take a stroll in Sūzhōu, with its winding bridges, lotus ponds, bamboo, and pavilions.

Tiger Hill is a popular spot with locals and visitors alike, named because the shape of the hill resembles that of a crouching tiger. For hundreds, if not thousands, of years visitors have gathered here to enjoy the beauty of nature, sometimes leaving their mark by carving calligraphy and poetry into the rocks, which can still be seen today. One of the most spectacular sights on the hill is the Cloud Rock Pagoda, a seven-story pagoda built in the 10th century entirely out of brick, completely unheard of in that day and age. The tower is sometimes called “The Leaning Tower of China” because of the slight lean of the building over the years because of the weight of the building sinking into the soil foundation, while the other side stayed upright on rock. In 1957, the government stabilized the pagoda by pumping concrete into the soil to create a more solid foundation.

The Sūzhōu Museum is designed to look like a modern interpretation of the many gardens that make Sūzhōu famous. The museum was founded in 1960, but the current, more modern building finished construction in 2006 by architect Ieoh Ming Pei. The museum boasts a collection of over 15,000 pieces, such as calligraphy, ceramics, jade, wood carvings, textiles, and more. The museum also has a book collection totaling over 70,000 books, and over 20,000 rubbings of stone inscriptions.

Are you ready to bask in the natural tranquility Sūzhōu can offer?

Share your thoughts on “Appreciate The Tranquility Of Sūzhōu With Chinatour.com”