Posted on June 2nd, 2015 by Elizabeth Cody in Outposts

An UNESCO World Heritage Site, Cartagena is a rarity in the impeccable preservation of its colonial buildings and heritage. The first Spanish colony on the American continent, Cartagena has always held historical significance, including as one of the first havens for freed slaves in the 19th century. Today Cartagena’s Old Town is frozen in time, with imposing churches, a labyrinth of cobblestone alleyways, and historic architecture around every corner. Outside of Old Town there are beaches, trendy restaurants and cafes, and coffee shops to relax in before you return to what feels like the distant past in the historical part of the city. Let Solar Tours take you on a tour of all of Cartagena’s Spanish Colonial charms. 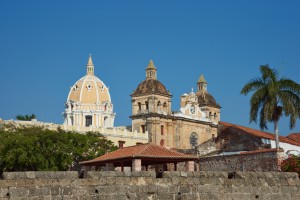 The most popular area of Cartagena is the Old Town, the historical walled inner city that draws tourists from all over the world for its glimpse into Cartegena’s colonial past. The walls surrounding the city were built to protect its inhabitants from attacking foreign armies, especially pirates who saw it as an easy target to steal gold from. The walls also separated the upper classes from the poor, who could only come into the city to work for the rich and leave again. In total they took over two centuries to complete due to damage from storms and pirate attacks; in the 16th century Spain reinforced the walls facing the sea over a period of 20 years, which still stand today surrounding the oldest of the colonial neighborhoods, El Centro and San Diego. The best way to soak in the history and ambiance of Old Town is simply to wander its streets, stopping to take in the monasteries, mansions, and palaces that still stand tall and proud. 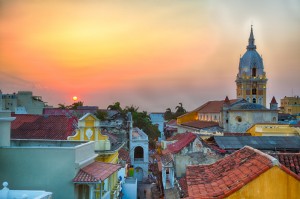 Standing vigil on the Hill of San Lázaro is the Castillo San Felipe de Barajas, a 16th century fortress within the city of Cartagena. The fortress stood over the city as protection from invading forces by both land and sea, with 8 guns, 4 gunners, and 20 soldiers. The fortress was named in honor of Philip IV of Spain, the king of both Spain and Portugal during the 17th century. Today the battle fortress is a preserved park for visitors to explore, especially the underground passageways built for supplies distribution and for evacuation. The tunnels were specially constructed so that sound traveled all the way down, making communication easier and impossible for invading enemies to sneak up on the fleeing occupants.

A different hill in Cartagena houses another significant Spanish colonial artifact, the Convento de la Popa. Sitting on the highest point in Cartagena at 150 meters, this convent has the most breathtaking views of the city you will find anywhere. In the chapel is an image of the Virgin of Candelaria, the patroness of Cartagena; legend says that she was a statue of the Virgin Mary holding a candle that suddenly appeared, and could not be destroyed. The current statue is a reproduction, as the original was washed out to sea in a tsunami in the early 19th century. The patio is filled with various flowers, and a relaxing place to take in the expansive views of the city. 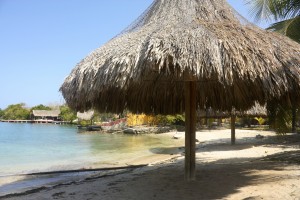 If you’re looking for a fun and novel way of seeing the city, then you will want to check out a tour on a Chiva. “Chivas” are brightly colored and open-air buses, some with a bar on board, that takes you on tours around the city. The chivas tour both the modern and colonial neighborhoods, and the tour guides are fun and engaging, often getting the passengers involved in impromptu music sessions! Some tour guides speak English and others struggle outside of Spanish, so some knowledge of Spanish would be helpful.

35 kilometers southwest of Cartagena is the archipelago known as the Islas del Rosario, a cluster of 27 coral islands. The islands are considered a national park and home to a diverse array of colorful fish, coral, and other organisms that call the reef home. The waters are a crystal-clear turquoise, ideal for diving and snorkeling; if you’re interested in learning, there are diving schools available on the island. If you want to learn more about the local wildlife, visit the Oceanarium, which allows you to observe the local wildlife on floating platforms and learn more in their Museum of Marine Life.

Are you ready to discover Cartagena?

To learn more about all Cartagena has to offer, visit Solar Tours online at www.solartours.com. or call 1-800-388-7652

Share your thoughts on “Stroll Through Colonial Cartagena With Solar Tours”