Posted on July 28th, 2015 by Elizabeth Cody in Outposts

Guilin is widely known by locals and tourists alike as one of the most stunning and picturesque regions in all of China. Children’s books call it “the best under heaven” and politicians introduced foreign dignitaries to China as their pride and joy. The city is surrounded by two rivers, four lakes, and large Karst mountains, and is favored for its fresh, clean air compared to larger Chinese cities. Guilin has kept up with the more contemporary cities like Beijing and Xi’an with a vibrant array of nightlife. 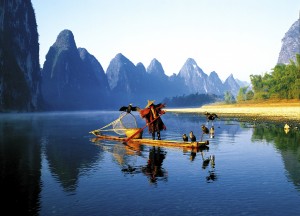 Fisherman on the Li River

The only remnant of the original Song-dynasty fortress is the City Wall, which is always lit up at night for a stunning photo opportunity. The area in front of the crumbling ruins is a popular hangout spot: watch the locals practice tai-chi, calligraphy, and dancing. The City Wall is near plenty of walking paths, and perfect for those looking for a scenic and leisurely stroll.

Surrounding Guilin are rivers, the most famous being the Li River. The Li flows through Guilin, running its course to join the Pearl River in Wuzhou. Cruises along the Li are popular, coasting along 52 miles and taking a leisurely 4 to 5 hours. The Li River is also home to the Reed Flute Cave and Elephant Trunk Hill, two major attractions in Guilin.

The Reed Flute Cave is a cave system comprised of stalactites and stalagmites, lit by beautiful colored lights. Henry Kissinger described the cave as “poetic”, which is easy to see when you first enter. The entrance was once hidden by reeds, the same that were used to create musical instruments, hence the name. The cave is made entirely of limestone and guided tours are always available.

The Elephant Trunk Hill looks just like its name: it resembles an elephant dipping its trunk into the water to drink. This effect was created by a natural arch in the stone, dating back millions of years. Guilin city officials like to use the silhouette of the rock formation as a symbol, and so is highly promoted as a tourist attraction. In order to see the full scale of the hill you will have to pay for a boat tour, as vegetation and fences have been planted to keep people from stealing the view for free. 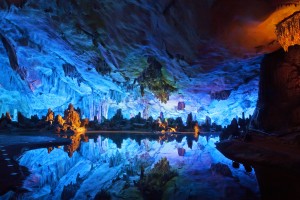 Inside the city is the Central Square, the focal point of local life that is often host to various festivals and holiday events. You might even find yourself swept up in the carnival-like atmosphere and dancing with a local! On the ground of the square is the depiction of a giant atlas, and at night the Lijiang Waterfall Hotel has the largest waterfall show in the world. The performance starts at 8:30 PM every night without fail. Bordering the Square are fascinating shops, delicious restaurants, and other local attractions.

Rising above Guilin is the Solitary Beauty Peak, which affords spectacular views of the city and the surrounding areas. Centuries of visitors climbing the peak created the need for a carved staircase, cut right into the rock. On the peak are ruins of the Ming dynasty palace mingling with newer buildings. The former palace has become the Guangxi Normal University and a performance space for locals to come and perform. The different ethnic groups that make up the population of Guilin enjoy performing at the site of the former palace, and creates an opportunity for visitors to see traditional dance performances.

Share your thoughts on “Explore Stunning Guilin With Chinatour.com”