Posted on September 22nd, 2015 by Elizabeth Cody in Outposts

Considered by many to be some of the most magnificent landscapes in all of the Polynesian Islands, Samoa is a small but visually stunning cluster of islands in the Pacific. Craggy cliffs and rocky formations make way for rich and fertile plantations, and visitors crawl through lava tubes or dive into the Pacific to get up close and personal with vibrant coral. Between spotless beaches and hidden lagoons, there is no shortage of marine fun to be had on these exquisite islands. Local Samoans take life at an easier pace than the rest of the world, and are never shy with a hospitable grin for visitors.

Like many tropical climates, Samoa is separated into rainy and dry seasons, rainy occurring from October to March and dry from May to October, with average temperatures of 79°F (26.5°C). For snowbirds looking to run from the freezing winter temperatures, Samoa is the ideal paradise to warm your frozen bones. The islands were formed by the eruptions and motions of volcanoes, but only the island of Savai’i still has any active behemoths. 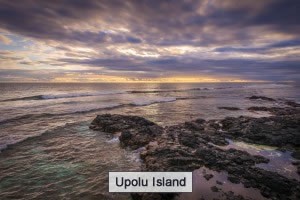 Food is an important part of Samoan culture, and the locals take great pride and care in its preparation. While not heavily spiced, Samoan cuisine depends on fresh local ingredients such as taro, raw fish, cooked green bananas, and breadfruit. The traditional cooking method is called umu, in which ingredients are placed on fire embers and covered with banana leaves until fully cooked through. Another traditional dish is oka, a fish salad comprised of minced raw fish marinated in lemon juice, coconut cream, chopped onion, and salt. What you cannot leave Samoa without trying is palusami, an umu dish of coconut cream, onions, and taro wrapped in taro leaves and cooked in fire embers. If you’re not feeling that adventurous, however, corned beef is a popular accompaniment to these dishes, and on every corner you’ll find restaurants serving Western-style or Asian dishes to appeal to tourists.

One of the more significant islands due in no small part to its status as the home of the capital city is Upolu Island. The capital of Samoa, Apia, has a population of nearly 40,000 situated on the north coast of the island. The island is an outdoor paradise, with national parks, beaches, thundering waterfalls, and small swimming holes are abundant. Take a dive to explore the reef, play a round of golf, or take your board into the water for some surfing fun; keep in mind that the reefs make surfing more hazardous, so only experienced surfers please. 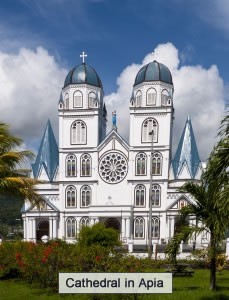 Founded in the 1850’s, Apia was crowned the capital of Samoa in 1959 and is the more urban of the islands, with cathedrals and government buildings. This city became the home of prolific author Robert Louis Stevenson during the last few years of his life, and his home and grave are open to the public for visitation. To learn more about Samoan history and culture, take a stroll through the Museum of Samoa, with exhibits on Lapita pottery, Samoan birds, historical photos, and information on traditional Samoan tattoos. For some energetic traditional performances and a divine buffet dinner, spend a Wednesday evening at Aggie Grey’s “Fia Fia” at Aggie Grey’s Hotel. Traditional Samoan dances, drumming, songs, and the fire dance are all performed, paired with a delicious buffet dinner. Fia Fia literally translates to “happy happy”, but is taken more as an invitation to “party hardy”. There is also a local brewery, the Vailima Brewery, offering tours of their brewing facilities. Be sure to make a reservation as tours are only given on certain days of the week.

Less developed than its neighbor Upolu is Savai’i Island, said by many to be the “real” Samoa. The island is informally arranged in smaller villages rather than proper towns or cities. There is only one paved road on the island, which makes navigation by car easy: you can watch the color of the soil shift from dark ash to glowing white sand as you travel. The appeal of Savai’i is in its natural attractions, away from the urban noise and rush of Upolu and Apia, and one of the best sights is the Alofaaga Blowholes. Lava created tubes from the cliff to the ocean below, and waves send seawater shooting up in a glittering fountain; wear skid-proof shoes, as the wet rocks can be slippery. Because of previous volcanic activity, the island also has a multitude of lava caves, fields, and mounds you can explore. Take a canopy walk in one of the rain forest preserves to get a higher perspective on the island.

For more information on Samoa and Air New Zealand, visit them online at www.airnewzealand.com/vacations.