Float Into Paradise on Lake Titicaca with CTS Fares | TravelResearchOnline

Float Into Paradise on Lake Titicaca with CTS Fares

Posted on January 10th, 2017 by Elizabeth Cody in Outposts

The largest lake in South America, Lake Titicaca has seen its fair share of civilizations come and go over the centuries. On its islands and shores you will find the decaying remnants of ancient Incans reflected in the calm waters of the lake. In fact, according to the Incans, the sun and moon were both birthed within the waters of the Lake.  Aside from its rich historical and cultural heritage, Lake Titicaca offers simplicity in abundance: blue skies, clear waters, and beautiful scenery as far as the eye can see. 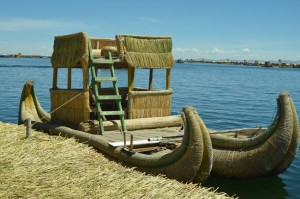 [/media-credit] A totora reed boat docked at the Uros Islands

Dedicated to the preservation of its culture, Isla Taquile takes immense pride in its pristine natural scenery and rich heritage. The tiny 4 square mile island (7 square kilometers) is inhabited by only 2,000 residents, the Quechua-speaking Taquile people. The local Taquiles uphold their traditions in their colorful clothing, their time-honored crafts, and delicious locally caught seafood. The island can be a strenuous walk, as most of the sights are uphill, but once you get there you will never forget the stunning beauty and energy of this humble island.

Back on the shore of Lake Titicaca is where you’ll find one of history’s most fascinating remnants: the funeral towers of Sillustani. These stone towers were built by the war-faring Colla people to honor their deceased leaders and aristocratic figures. The towers often housed entire families, as well as food and supplies for their journey to the afterlife, and visitors can walk the ruins on a guided tour.

One of the biggest draws on the Lake are the floating Uros Islands, man-made islands built from bundled totora reeds into, essentially, giant rafts the community lives on. The Uros people depend heavily on this reed, as not only does it comprise the very ground they walk on, but it is also the construction material for their homes, and is even edible with a sweet flavor to it. The Uros people eventually conceived and created the islands as a way to escape the aggressive Incan and Colla people on shore. Visitors to the floating islands will see the ingenuity of the Uros people, from reed-woven boats to arches and playgrounds comprised entirely of totora.

End your trip to Lake Titicaca with the area’s quirkiest attraction, the Yavari ship in Puno Bay. This ship is the oldest steamship on Lake Titicaca and was commissioned and built in the early 1860’s by the Peruvian government as a passenger, cargo, and military vessel. Over the years the Yavari fell into disrepair and neglect until 1987 when a charity organization bought the ship and restored her. Yavari served as a static bed and breakfast until 2015, when she successfully underwent a test run into the open lake waters, making her sail-worthy again. Visitors can book stays at the bed and breakfast, or take a trip on the lake during the ship’s scheduled sailings.

For more information on CTS Fares, visit them online at www.ctsfares.com.