Posted on March 7th, 2017 by Richard Earls in Outposts

The breathtaking and enrapturing Victoria Falls are a must for anyone visiting Northern Zimbabwe. These majestic falls were discovered by David Livingstone, a British explorer, in the mid 19th century and named in honor of his queen, Victoria of Britain. Victoria Falls is considered to be the largest in the world, at over 5600 feet (1708 meters) wide and 350 feet (108 meters) tall, creating the world’s tallest falling sheet of water. The water cascades into six different gorges, and many visitors opt to defy fate by swimming in the naturally created “Devil’s Pool” during the season, when rocks create a natural barrier that helps keep swimmers from falling over the edge of the falls. 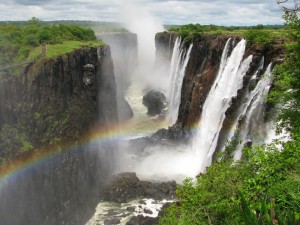 Victoria Falls is easily Zimbabwe’s most popular attraction and is one of the great wonders of the world. The mile-wide (2km) wall of water pierces deeply into the Zambezi Gorge and creates a cloud of mist visible for more than 20 miles (32km). Adrenaline junkies know Victoria Falls as the ‘adventure capital of Africa’, and it offer a wide variety of adventure activities, including excellent whitewater rafting, and  bungee jumping into the Zambezi River gorge from the a 364-foot (111m) high bridge linking Zimbabwe to Zambia. There are plenty of opportunities for those who would rather lie back and relax, including sightseeing flights over the terrain, wildlife viewing  and serene sundowner cruises in the water above the falls.

Wildlife is abundant in the  the Zambezi Valley, in the national parks, and on the banks of Lake Kariba, where wild hippo, buffalo, crocodiles, elephant, rhinos and lion roam. The vast wildlife reserves on the Zambezi River’s banks provide the finest safaris by canoe in Southern Africa.  The UNESCO World Heritage Site at Mana Pools,  is famous for the variety of game its ecosystem hosts. Hwange National Park supports an enormous concentration of wildlife, has the distinction of being the largest game reserve in Zimbabwe. Lake Kariba is an important source of hydro-power, as is known for its fishing resources. Lake Kariba is a a magnificent watercourse dotted with islands and surrounded by mountainous forests. Houseboats provide a terrific vantage point from which to take in the African sunsets, participate in a variety of water activities, and to witness the wildlife drawn to the lake.

With the opening of the new Victoria Falls Airport, South African Airways is very excited to announce some enhancements to their schedule between Johannesburg (JNB) and Victoria Falls (VFA). Effective March 01, 2017, SAA began operating daily service on this route with a wide-body Airbus A330-200 aircraft on a year- round basis.

The Airbus A330-200 features 36 lie-flat Premium Business class seats and a 186 seats in Economy class, all featuring personal on-demand entertainment. This aircraft offers a 60% increase in capacity on the route with an additional 84 seats per day in each direction. The flight schedule remains as it is currently with a departure from Johannesburg (JNB) as SA040 at 10:50am, making for a perfect connection with SAA’s daily non-stop flight SA204 from New York – JFK. On the return, flight SA041 departs VFA at 1:25pm also making for a convenient connection with SA203 to New York-JFK and with flight SA207 & SA209 to Washington D.C.-Dulles. For more information please consult with your GDS or www.flysaa.com

Share your thoughts on “Visiting Victoria Falls with SAA”