Posted on December 28th, 2018 by Britton Frost in Deck Plans

Last month, I sailed aboard Celebrity Edge. The innovative ship has a lot to offer – from her 29 food and dining venues to her unique public spaces, which I highlighted in a previous post.

Throughout my short time on the ship, I found myself completely engaged the whole time. Whether it was the art – seemingly exhibited in every inch of the ship, down to the construction of the ship itself – or the engagement with actors in various public spaces, there was not a single second on the ship that I felt there wasn’t something to do. 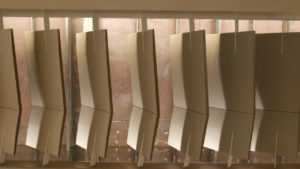 Even a seemingly basic hallway is an artistic masterpiece, showcasing the steelwork from the guts of the ship. © 2018 Britton Frost

In my experience, art on ships is used to enhance the design. It makes the ship inviting. On Celebrity Edge, however, it seemed to have a different function. The art is meant to engage passengers, provoke thought, and start conversations. And that it did. Multiple times when I ran into people I knew on the ship, we discussed certain works of art on the ship.

Most notable in the art department was the room leading to Eden. This hallway is covered on both sides with mirrors and features golden trees. Hard to explain – and to photograph, at that – this is something that you need to see in real life to be able to fully take in. It was a perfect divider of space between Eden, and the few restaurants and shops that surrounded it, and the rest of the ship. 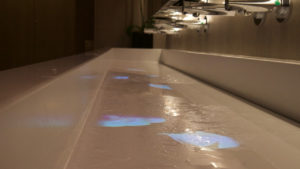 Flower projections on the sink allowed for entertainment during hand washing. © 2018 Britton Frost

It seems natural to talk about Eden next, which was definitely the standout of the ship. I visited Eden multiple times during my two-day voyage. I wanted to make sure to visit it at different times of the day as well, as Celebrity puts emphasis on the transformation of the Edge’s public spaces from day to night.

During the day, guests were invited to Eden to solve puzzles and play games. There were three entertainers – Zoom, Bloom, and Loy. At one point, Zoom grabbed my hand and told me he needed to take me somewhere.

“Wherever you want. Just go! Run! As fast as you can,” he replied. 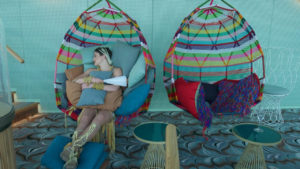 We ran through Eden and chatted, he introduced me to friends, and I ended up sitting with Loy. Loy was very high maintenance, and very tired. She had guests bring her pillows – as many as they could find. And when I suggested a change in location, she made me take the pillows with us. This is a small example of what Eden had to offer, but probably the most memorable experience of the trip. 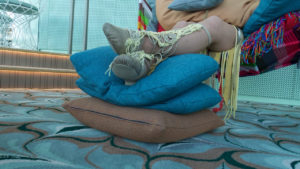 And yes – she even made me place them under her feet. © 2018 Britton Frost

I was able to interview Becky Thomson Foley, the associate vice president of entertainment for Celebrity Cruises, and ask her about the entertainment offered onboard. I mentioned a conga line that formed at Eden the night before, which Becky states happened organically.

“There is nothing on a piece of paper that says at 10:55 a conga line happens. If you were here for seven nights, and you went back there every night, every night you’d get a different experience. The Edenists are so well trained and they come from immersive experience. They know if they’ve seen you before, they don’t come and say the same thing. They’ll remember your name, and they will provide you with a different experience every time.”

Becky told me that the goal of the Celebrity Edge is to entertain guests of all ages, whether they’re – in her own words – three, thirty-three, or sixty-three.

Though most of my downtime was spent at Eden, I was also able to experience The Club and The Theatre. I intentionally use the word experience, because it was just that.

I walked into The Club and was immediately thrown into an adventure. I was instructed to find The Gambler and The Prince. Upon finding The Gambler, I was directed toward The Prince – who naturally was standing on a balcony overseeing the rest of The Club and its residents. The Prince was accompanied by his bodyguard, who gave me a very hard time before I was finally allowed through to question The Prince about my mission. The Prince then slipped me a note reading, “Help me. Go to The Star for more instructions.” Long story short, I was sent around to engage with different entertainers in hopes of solving some kind of mystery. 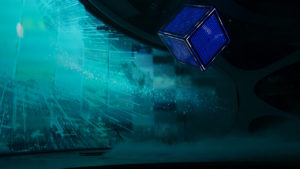 Although I was only able to catch a glimpse of the performance in The Theatre because of my set dinner time, I was impressed. Even the show, in which I was a spectator, felt immersive. I credit this to the design of the stage, which was a circle that protruded into the audience. Because the audience wrapped around the stage, I was able to feel like I was part of the production, as I was seeing the actors from all different angles.

It is safe to say that Celebrity Edge is not lacking in entertainment, in fact, there was so much that I did not have time to experience all the different entertainment options during my sailing. Whether the ship is keeping guests engaged by the immersive experiences that are offered in The Club and Eden, or more traditional experiences such as the shows in The Theatre, and live music throughout the ship – and I use the word traditional lightly – there was always something to do aboard the ship. Even if I was simply viewing the art on the walls.

Share your thoughts on “Let Celebrity Edge Entertain You”