Posted on February 24th, 2021 by Steven Frankel in Point-to-Point

Despite the high prices that everyone fears when cruising resumes this June, there are several genuine bargains that offer exceptional value when clients book immediately. Will these cruises be standouts, or will they be joined by many other cruises that offer significant value? 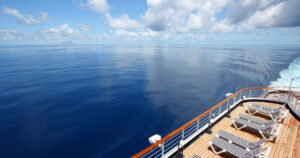 Suggest Your Clients Cruise Antarctica for What Norway Costs

Seabourn has just started the ball rolling on booking its first of two expedition ships. It’s slated to go into service in December 2021. The Seabourn Venture will start with cruises from London to the Norwegian and Russian polar regions; but, by summer 2022, it will be cruising to Iceland and Greenland and feature spectacular views of the Northern Lights. Every one of its 264 guests will have veranda ocean-front suites and Seabourn luxury features such as a restaurant featuring recipes by Michelin-starred chef, Thomas Keller. The ship will be equipped with 24 Zodiacs, enough for every guest to go ashore at the same time, and two 6-passenger submarines able to descend 1,000 feet and broadcast video to the entire ship. There will also be an open-bridge policy (badly missed by veteran cruisers); and a complimentary custom Helly Hansen parka and backpack for every guest.

The big news is that starting in November 2022, the ship will initiate 11-night The Great White Continent cruises to Antarctica for much less than clients will spend for comparable trips. Guests will fly to Buenos Aires at their own expense; but, from there, Seabourn will put them up in a hotel for the first night and fly them roundtrip to Ushuaia (at the southern tip of Argentina) to join and return from the ship. That means that they will spend much more time in Antarctica than competing cruises.

The cost? $10,999 for a veranda suite—just about the same price as what guests would spend on a summer cruise along the Norwegian coast on Regent, Silversea, or Seabourn. And, those cruises don’t include two air flights to get to and from the ship, exploring Antarctica, the two submarines, or the parkas.

Seabourn mailed out its brochure on the Venture this week. If your clients don’t book by the beginning of March, the ship will likely be sold out, or the prices will double. Believe it or not, at $1,000 a night, this cruise is a bargain.

Oceania’s Nautica is one of the legendary “R ships” launched by Renaissance Cruises about 20 years ago. With their small size and stable hulls, the former R ships are renowned for providing safe passages through every ocean. I’ve enjoyed them on cruises to Australia, Northern Europe, the Med, and across the Atlantic. All eight R ships are still in service, with four owned by Azamara (the entire Azamara fleet) and four owned by Oceania.

The 12-Night Mediterranean Traveler Voyage leaves on July 6, 2021, which is about the date cruising will resume in earnest around the globe. The cruise will start in Venice (be sure to advise clients to fly in 2-3 days early) and will proceed to Dubrovnik, Amalfi, St. Tropez, Marseilles, Barcelona, Cadiz, and Lisbon, as well as some lesser-known ports.

There are only two sea days on this cruise, and about 12 hours are dedicated to visiting each port. Since the Nautica is often permitted to dock in the center of town due to its small size, guests may spend minimal time on shuttle buses or tendering from the ship. With no late evenings or overnights being scheduled, you probably won’t advise clients to visit cities that aren’t on the coast, such as Florence, Rome, Paris, or Madrid, or to schedule fancy dinners onshore.

Many of the ports can be best seen by simply walking around or a taxi. For personal guides in any of these ports, try www.ToursByLocals.com. These are the best ways of exploring Venice, Dubrovnik, Amalfi, St. Tropez, and Lisbon.

Cadiz, Marseilles, and Barcelona are probably the only ports where an excursion is needed.

Two other hints for this cruise: Avoid lunches on the ship and book late dinners.

About two-thirds of the staterooms on the Nautica have balconies, and these are the best staterooms because of their superior ventilation and for enjoying the views. A B2 Veranda goes for only $3249 ($270 a night!), and the “O’Life Fare” (Oceania name for a special sale) that includes economy air and a choice of amenities is only $5249 per person.

The Crystal Serenity is one of the finest cruise ships afloat. Accommodating 980 guests, it provides cuisine, spaciousness, and service about which cruisers on larger ships can only dream. And, with 6 out of 12 days spent entirely at sea, the ship is really the destination. Originally a boutique line with only three ships, Crystal has now broadened its reach to include riverboats and expedition ships.

The Crystal Serenity is rated by Berlitz Cruising & Cruise Ships as being among the dozen top ships of the 300 they rate. All of the staterooms have balconies, and the ship has a restaurant started by Nobu Matsuhisa. Dinners at the Beverly Hills location of Matsuhisa cost about $300 a couple. On the ship, you can eat there as often as you like provided they have room. (HINT: Make reservations for right before they close and let the maître d know how much you enjoy the meals.)

Crystal also the first major cruise line to insist that all of its guests be fully vaccinated at least two weeks before the ships sail. It was probably influenced by the data provided in a recent Cruise Critic poll that 80 percent of cruise passengers want to sail on ships on which everyone’s vaccinated. Probably by the time this ship’s sails on September 5 this year, nearly every high-end cruise line will adopt that standard.

The cruise starts in Southampton (London) and makes a port call in Cork; from there, the ship then goes right across the Atlantic, stopping only in Bar Harbor, Boston, Provincetown, and New York City. Guests’ layover for one night in New York City, where they use the ship as their hotel. The pier is only a 10-minute cab ride from the Broadway theaters. This is no longer a “Cruise for the Rich & Famous.” At $5215 per person ($427 a night) for this sailing, it’s a genuine bargain for one of the dozen top-rated ships.

Clients Will View the World Differently After this 13-Night Cruise to Australia, Bali, and Singapore

Many multi-generational families are ready to cruise in places other than Mexico and the Caribbean. Suggest they try cruising in Australia and Asia. Especially if they live on the west coast, the cost is about the same. Royal Caribbean’s Serenade of the Seas 13-Night Asia Repositioning Cruise is one of the best ways of doing this economically.

It is one of Royal’s smallest ships with “only” 2,097 guests. It’s very well suited to families—especially those with three generations on board. The ship is glitzy with a nine-deck, mostly-glass atrium. It includes Adventure Ocean Kids Clubs for children and teens, a rock-climbing wall, a miniature golf course, and a children’s water slide; but also has lots of lounges, quiet places for couples, and a casino for adults.

More than half the staterooms have balconies. These would be the best choice for sailing the Australian coast; especially if you book on the starboard side where you can enjoy photographing the spectacular sunsets.

The itinerary can’t be beaten. The ship goes from Sydney, Australia, on February 27, 2022, to Arlie Beach, Yorkie’s Knob (Cairns), and Darwin through the Great Barrier Reef—then cruises to Bali and Singapore. Both Sydney and Singapore are usually rated among the best cities for tourists to visit. Guests can happily spend at least three days in each place.

The Sydney Zoo is where your clients can get up-close and personal with a koala. It’s on an island in Sydney Harbour that is reached by ferry. The harbor is 150 miles long. The Rocks, the area where the ship docks, is full of interesting shops, restaurants, and bars. A really interesting activity to recommend is the Midnight Photo Safaris, where you take a 4×4 at night over hills and streams to photograph kangaroos, wallabies, and duck-billed platypuses on a game farm about an hour outside of Sydney. Anyone with courage and strength can also go on the Sydney Harbour Bridge Climb, in which you walk over the top and across one of the world’s most iconic bridges.

At the end of the cruise, the street food and local celebrations in Singapore will be long-remembered, and the Night Safari at the Singapore Zoo, where guests are only separated from tigers and elephants by nearly invisible wire fences, metal grids set in pathways, and narrow moats. Your guests will tour the Night Zoo on an open-sided small train.

In between, you’ll enjoy beach life in Queensland and snorkeling in the Great Barrier Reef. Your clients may also want to visit the Outback or go one on one of several jungle expeditions in Darwin.

The cost for a balcony stateroom is just $1906. However, this is a ship where many things cost extra; so I’ll add 30% to the cost and estimate it at $2477 per person. For 13 nights, this still is only $191 per person. Not bad for cruising in one of the world’s most spectacular regions on a ship that welcomes guests of all ages.

Two months ago, I recommended four luxury cruises to Australia for December 2021. They started at $587 per person each night, triple the adjusted cost of the Serenade of the Seas cruise. To my mind, this qualifies this cruise too as a true bargain. If you need any more information about any of the cruises I’ve mentioned in this article, don’t hesitate to contact me at steve@cruisesandcameras.com.