Posted on May 8th, 2018 by Joey DeLoach in Outposts

Buenos Aires, Argentina is the perfect mix of Old European influence and the passionate culture of South America. The largest city in Argentina, it was named after the fair winds which drove the trade in and out of the city. This made the city a blender of culture from all around South America, and the world. From classic architecture to some of the best steaks in the world, Buenos Aires will delight the traveler with its sights and sounds. 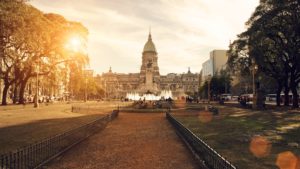 The subtropical climate of Buenos Aires in January is an average of 76 F, perfect for those who want to escape the freeze of winter in the Northern Hemisphere. This combined with beaches along the Rio de la Plata, the world’s widest river, gives the traveler a unique experience in South America. The city is broken up into 46 distinct barrios (districts/neighborhoods). Some of the main barrios are Microcentro, San Telmo, La Boca, and Palermo. The Microcentro is the location most tourists will visit, as it is near most of the historical spots located in the Argentinean capital. Here, you’ll find Florida Street, a street full of shopping all of sorts and is a well-known pedestrian street for leisurely walks through the city. The San Telmo barrio is the place to witness the rich, historical architecture of Buenos Aires. Colonial-style house line narrow cobblestone streets, lit by wrought iron lanterns. San Telmo has an atmosphere that takes the traveler back through time to centuries past. On the other hand of rich history, the La Boca district is a barrio with a shining personality. Brightly painted houses of greens, yellows, reds, and purples make the barrio pop with personality. The Palermo barrio is a newer, and hip, neighborhood. The traveler can find many restaurants, boutiques, and bars along tree-lined streets. This more modern neighborhood features sub-neighborhoods such as Palermo-Viejo, Palermo-Hollywood, and Palermo SoHo. 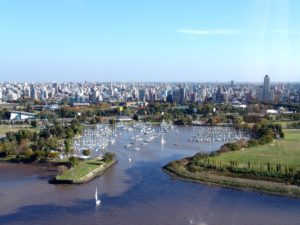 Around Buenos Aires you’ll find many activities for the traveler to enjoy and revel in their getaway. As mentioned earlier, the historical relevance of the San Telmo barrio will have travelers astonished at the depth of foreign history. Tango, Buenos Aires’ famous dance style, is available to witness at entertaining shows; or, in clubs and salons where the traveler can dance this sensual dance themselves. Steak and wine, are staples in the city. Buenos Aires is known for its grilling of some of the best cuts of beef in the world. Steakhouses are common in a lot of areas, as is the accompanying Malbec wine which are made in Argentina. Travelers will find a tasteful experience in these amazing meals. 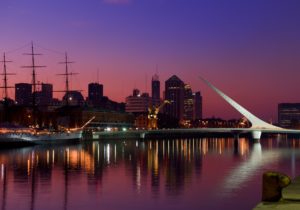 The historical sites in Buenos Aires are worth the visit while in the city. The Plaza de Mayo is the site where the city was founded. Formed in 1884, it was the city’s first national monument. Plaza de Mayo is located in Microcentro, which is located in the barrio of Montserrat. The traveler can find major monuments and points of interest here. Along the plaza is the Cabildo, which houses the National Museum of the Cabildo. There, the traveler will find paintings, clothes, artifacts, and jewelry from the 18th century. The white-washed colonial exterior juts up into a single tower that is impossible to mistake. Another notable presence around the plaza is the La Casa Rosada (The Pink House). La Casa Rosada is the official residence of the president, though it is more known for its baby pink exterior and the museum of objects which document the history of Argentina’s presidents. The Buenos Aires Metropolitan Cathedral is a wonderful example of a Catholic church. The exterior is simple stone with large columns at the entrance. The cathedral’s ornate interior has arched ceilings and biblical paintings along its walls. The traveler will feel awe in being under such a magnificent example of cross-architectural styles: 18th century dome, 19th century Neoclassical facade our front, and 18th century statues and altarpieces.

Thanks to Aerolineas Argentinas, Argentina’s largest airline, getting to what many call “one of the top desirable destinations in the world” is easy. Buenos Aires should be in the top destinations for travelers, its interesting and colorful culture will leave the traveler in awe.

Share your thoughts on “Desirable Buenos Aires by Aerolineas Argentinas”