Cape Town was started as a European outpost but has grown to be one of the most multicultural cities in the world. Encompassed within a peninsula, formed around mountains and a bay, it is a unique and bustling city surrounded by nature. That’s why South African Airways wants the traveler to know about Africa’s most southern city, Cape Town. 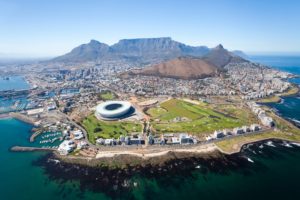 Cape Town, known as ‘Kaapstad’ in Afrikaans, is the second largest city in South Africa. It was started on Table Bay as a supply stopover for ships traveling around the continent of Africa. These days it is so much more than a supply depot, it is a city of multiculturalism and cosmopolitan bustle. One look at Cape Town and it’s obvious that Table Bay and Table Mountain are the most recognizable landmarks. In fact, the city wraps it’s urban sprawl around the northernmost part of a 50 km-long range of mountains spanning to the end of the peninsula.

Mountains line Cape Town on three sides of the city, creating a bowl-like shape in the center where the center of Cape Town sits. The most famous feature of these mountains is Table Mountain. Table Mountain rises a kilometer up from the city below and has a flat top that resembles a table, which is 2 miles from side to side. The traveler can hike up to the top or take the cableway for easier access. Travelers are likely to see the occurrence of clouds rolling along the surface of this table, an extraordinary sight for the human eye as clouds become a living carpet. On the two ends of Table Mountain are Devil’s Peak and Lion’s Head, accenting the backdrop of Cape Town’s cityscape. 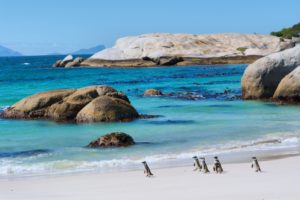 Of course, with Cape Town snuggled against a bay, the beaches will not disappoint the traveler. The beaches of Clifton, a suburban area on the western side of Cape Town, are well-known around the world. They have been rated in the ‘Top Ten Beaches’ by Discovery Travel Channel. The pure, white sands are immaculate and a pleasing in the contrast of waters that have received the coveted Blue Flag status. Boulders Beach is a stark contrast to Clifton. It is hidden within multiple inlets between granite boulders. Here the traveler may not find the pristine sands of a tropical, but they will find beautiful and calm waters to enjoy- as blue as the sky above. The traveler will also get a kick out of the African penguins that can be witnessed from a few meters away at certain points. 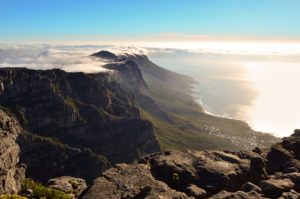 The city itself is also full of things for the traveler to do and see. One aspect of the city that is clear is its creative nature. Brightly colored art depicting the mixture of culture decorates buildings. Cuisine around the city is comprised of many different tastes. Being a city of immigrants and expatriates, people from around the world have added their particular ways to the multicultural melting pot. Indigenous flavors are found alongside Dutch, Indonesian, Greek, Portuguese, and Mozambique. Along the northwest of Cape Town, the Sea Point Promenade lets the traveler stroll along a relaxing path where the city, ocean, and mountains meet.

Cape Town is more than what the traveler has imagined it. It is bright and beautiful. It has nature to astound the traveler with great views from above and relaxing swims below. That’s why South African Airways wants to fly the traveler to Cape Town, so that they may see the unique culture and surrounding natural wonders of a city tucked away to the very south.

Share your thoughts on “Cape Town with South African Airways”