Posted on January 14th, 2021 by Joey DeLoach in Departures

In a continued look at the beauties of Hungary, I’ve covered some of the more well-known cities such as The Best of Budapest – as well as The Interests Around Budapest. Today’s article on Hungary will dive a little deeper into the premier holiday destination of Central Europe, Lake Batalon and its surrounding areas. As central Europe’s largest freshwater lake, Lake Balaton is a prime in Hungary destination to enjoy it’s Mediterranean-like climate.

Once exclusively the home of resort centres for the aristocracy of Hungary, Lake Batalon’s tourism expanded to the middle class in the late 19th century. And, while resort towns line the lake these days, the more historic towns gain quite the attention of visitors. 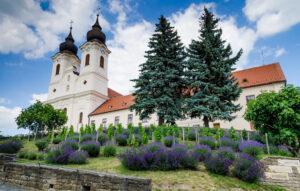 Set on the north shore of Lake Batalon, Balatonfüred is the oldest resort and the unofficial “capital” of the north shore. Known as a yacht destination, the marina is a hot stop for those boating. Once ashore, the streets are lined with magnificent villas of the wealthy and trees – all adding to the light-colored aesthetic of Hungarian and Mediterranean influence. As if the walk among the stylish streets and alleys weren’t enough, the thermal waters of a world-renowned heart hospital will hit the spot for those with cardiac issues.

Also, just west of Balatonfüred is the 4km long peninsula of Tihany. Reaching over more than halfway to the southern shore, the peninsula is home to the Church and Museum of the Benedictine Abbey. This Benedictine abbey was established in 1055 AD and has become a major point of tourism in the area for its simplistic beauty. The traveler should not forget to take a stroll through the Tihany Lavender Fields for a walk of pleasant smells and sights. 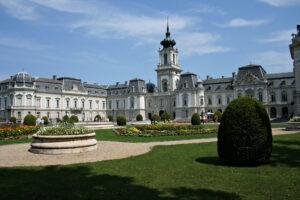 Keszthely, located on the northwest corner of Lake Balaton, is a shore town a bit removed from the chaos of major tourism. The shallow waters of the shore are perfect for lounging the day away in a relaxing atmosphere. While in Keszthely the traveler should visit the Balaton Museum. Built in 1928, the museum features the archeological, ethnographical, historical, and natural scientific values of the Balaton area.

Though the Lake Balaton museum is sure to be an entertaining take on history, a must visit for the area is the Festetics Palace. Construction on the palace began in 1745, originally including 100 rooms. Later, 150 years, the two wings of the palace were extended. The museum contained within, the Helikon Palace Museum, is made up of 18 rooms that contain antique pieces showcasing the lifestyle of the 18th and 19th aristocracy. A sure way to please the traveler interested in history, a stop in Keszthely is worthwhile. 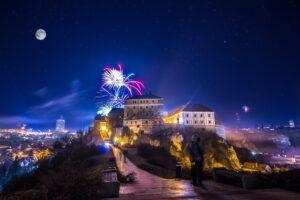 The city of Veszprém, also in Western Hungary, has a long and rich history in the country. It was the city of Hungary’s first king, St. Stephen, and the site of the country’s first cathedral and stone castle. Awarded the European Capital of Culture Award in 2018, plans have already begun for a celebration of this accolade in 2023.

The traveler will not miss Veszprém Castle District, which is prominent on the horizon at all points in Veszprém. Built in the 10th and 11th century, the castle that sat atop one of the seven summits in the city was mostly demolished in 1706. Though, on top of the hill where the fortress once sat, there is the Veszprém Castle District which grew on the high, rocky foundation where the castle once stood. When the traveler enters the Heroes Gate, a main entrance to the district, they will be greeted by the Fire Tower. This tower is a remnant of the castle and provides a view of the city, as well as surrounding areas. Afterwards, a stroll through the cobblestone streets to museums, palaces, galleries, and churches will complete a jaunt through time in the Veszprém Castle District.

Another stop within Veszprém is the Cistercian Abbey of Zirc. The Basilica of this abbey is considered to be the largest Baroque-style altar structure in Hungary. Its Historic Abbey Library houses 65,000 volumes, and almost 50-acre Arboretum to stroll through, completes the charm of this abbey. The traveler can even try one of the Abbey’s special artisanal beers, perfected over 300 years. 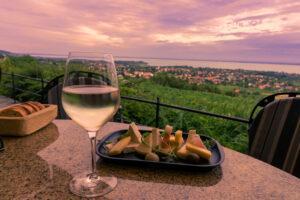 As you’ve read so far, The Balaton Region is full of amazing things to do and see. But a major draw to the area is the rising wine & gastronomy scene. The vineyards of this wine region cover approximately 2,4711-acres, with vineyards being cultivated around Lake Balaton since the the 1st century AD. The wines made in the region are Olaszrizling, Ezerjó, Pinot Gris, Chardonnay, and Müller-Thurgau. These are served at the many bistros and scenic terrace restaurants available to the traveler, while this is stepped up with the many wine festivals such as the Badacsony Wine Week and the three-week long wine festival in Balatonfüred.

The Balaton Region is also the second most popular gastronomy spot in Hungary, unsurprisingly just behind Budapest. The very same bistros that serve the fantastic local wines offer up local dishes, sometimes with a twist, to the traveler. Zander, Hungary’s most sought after fish, is served up many ways including fried. Crispy fried bream is always hot to order. Then, there is the famous Balaton fish soup which includes a tasteful mix of zander, pike, eel, tench, trout, roach, river perch, and carp. For the seafood lover, Balaton gastronomy is pure delight.

Western Hungary is a country full of monuments, castles, and countrysides. Mix these up with the popular Lake Balaton, and you’ve got a traveling experience that is sure to be highlight of the traveler’s life. That’s why the Hungarian Tourism Agency is looking forward to setting up the perfect trip for Seniors, Explorers, and Families to truly experience Hungary. They also have a 360 virtual tour available at WOW Hungary 360 Tour Map. From start to finish, these experiences will quench the traveler’s thirst for a phenomenal travel destination.

Travel Agents: You can use the content above on your own website or newsletter, compliments of the supplier sponsor above who has paid for your use of the materials. All you need to do is to follow the directions in the TRO Licensing Agreement. Also, please take a moment to check out the travel supplier that makes your use of this material possible. To use – Follow the procedure outlined in the TRO Licensing Agreement. Then, right click on this page and choose “View Source”. Copy the HTML and paste the copied html into your own webpages or newsletter. You may remove advertising.

Share your thoughts on “Lake Balaton and Western Hungary”