Explore the Possibilities for Women Only Travel to the UK

Posted on December 3rd, 2021 by Paull Tickner in Agent Perspectives

If you are a frequent reader of my Agent’s Perspectives, over the past 19 months or more, you will have seen dozens of bright ideas that will appeal to clients interested in castles, gardens and stately homes, on location and bookshelf tours, and the visual and performing arts. This week, the focus sharpens on a short stack of imaginative ideas for Women Only travel, which hopefully might strike a chord with you. There are more themed tour suggestions in the works!

Read on and let’s release the potential for some Girls Getaways to Britain.

Putting the Tea in the Cotswolds

If you know the owner of a Tea Room, talk to them about this Cotswolds-based programme. Best served from Sunday for 4 nights, it blends together visits to stately homes and privately owned gardens; a lesson in how to prepare and correctly serve English Afternoon Tea; an evening at the Pudding Club; tea, scones and cakes in at least one near perfect, award-wining tearoom and in other interesting places like the Pump Room in Bath and at one of the Shakespeare Houses in Stratford upon Avon, finishing with some free time in London. 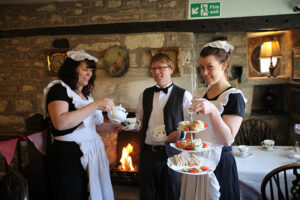 Golf, Gardens and Some Antique Hunting

If you’re a golfer, invite a few of your friends to join you for a few days in the Cotswolds for a couple of rounds of golf and a mini-Solheim Cup match against a local women’s team. Add a circular tour of some of the well-known Cotswolds market towns, pausing for some antique hunting on the way, tea and cakes in a privately owned garden and a few hours at magnificent Blenheim Palace. Finish with a flourish with 2-3 days in London for the Portobello Road Market, Harrods and an evening at the theatre. 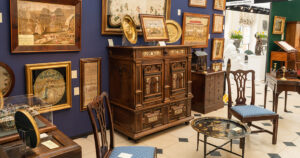 We don’t have anything on the scale of Paducah, but we do have four very good Quilting Fairs that will appeal to anglophile quilters. The Scottish Quilt Show (3rd-6th March) is the only major quilt show in Scotland; and it is followed by the National Quilt Championships (28th-30th April), showcasing displays from well-known quilters and textile artists. Quilts UK (12th-15th May) displays hundreds of quilts, trade stands and demonstrations and the Festival of Quilts (18th-21st August) is Europe’s leading patchwork and quilting event, attracting an international audience of over 25,000 quilters. 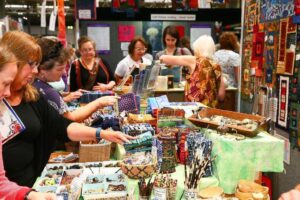 …And Embroiderers and Needleworkers

Not many people know this but Liverpool, the birthplace of the Fab Four, is THE place to go for those interested in embroidery and needlework. Visits include a tour of the Mortlake tapestries at Speke Hall, a special tour of the Elizabeth Hoare Gallery at the Anglican cathedral, a viewing of the ecclesiastical vestments at the Metropolitan Cathedral of Christ the King, and the remarkable 17th century stumpwork at the Lady Lever Art Gallery. In London there’s a special tour of the V&A and a full day at the Royal College of Needlework. 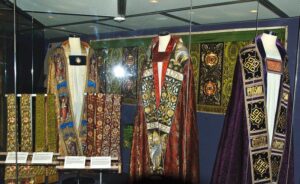 Flying non-stop into Manchester, this 3-night Shop ‘n’ Ship itinerary works well as a long weekend Girls Getaway to Stoke on Trent, the world capital of ceramics. With discounts of up to 75% and shipping/export advice available, there are throw your own pot opportunities at Wedgwood, a factory tour and visit to the Wedgwood Museum and a special, hands-on tour of the Emma Bridgewater Factory. Visits to the Royal Doulton Outlet Shopping Store, Portmeirion, the Spode Works Visitor Centre and the Ceramics Collection at the Potteries Museum and Art Gallery can be included. 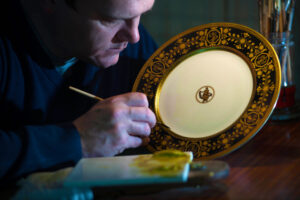 A Foodie Tour to London and York

Let me whet your appetite with a chef/food writer tasting-walk around the artisan-food laden stalls at one of London’s leading food markets and a Chocolatier’s tour of an impressive variety of stores featuring home-made chocolates and truffles, which can be further enhanced by a hands-on chocolate workshop. A rapid train ride north will take you to York for a half-day cookery class at the 5-star Grand Hotel Cookery School, a side trip for an unusual tasting tour of Malton, Yorkshire’s Food Capital and English Afternoon Tea in two fabulous locations. 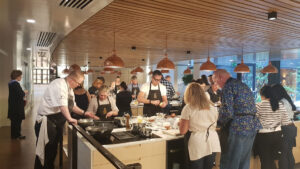