Welcome to The Class of ’71: My Notre Dame Story | TravelResearchOnline

Welcome to The Class of ’71: My Notre Dame Story

Posted on January 17th, 2022 by Mike Marchev in Mike's Monday Cup of Mo-Joe

I was a senior in high school in 1967. It was a Friday afternoon when Mr. Zuckerman, my guidance counselor, informed me it was time to present my credentials to a number of colleges in the hope one would grant me admission. At the time, high school graduates had two choices: Attend college or get fitted for army fatigues before being shipped out to Vietnam. In most cases, this choice was considered a “no-brainer.”

The problem was, I had not given it any thought up until that Friday afternoon. Mr. Z suggested I go home and discuss my options with my parents before reporting back to him on Monday with my plan of attack.

I told my mother that it was time to identify a few college choices. She asked, “So where do you want to go?” I remember thinking of a reputable place where they played pretty good football. The name of the school shot into my head, and I said, “I think I’ll apply to Notre Dame.” To which my mom responded and I quote, “Good as any.” 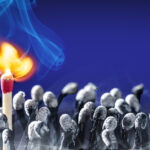 On Monday I was looking forward to telling Mr. Zuckerman that I had made a decision. I told him my school of choice was going to be Notre Dame. At that very moment, I heard him stifle a laugh and pretend to cough.

After wiping the tears from his eyes, he not-so-gently informed me that “my class rank coupled with my SAT scores were two primary reasons why I would never be heading to South Bend, no less play football for The Fighting Irish.” He then went on to suggest two or three local colleges in New Jersey that he thought I might be a “shoe-in.”

That night, I reluctantly informed my mom that Notre Dame had become yesterday’s news. I told her that my guidance counselor informed me it was out of the question. That is when she asked me who this guy Zuckerman was? I told her, and she followed with another question. “Is he the guy who accepts or rejects high school candidates applying to Notre Dame?” When I said, “no,” she told me to apply anyway.

I did. And six weeks later I received a letter with the logo of a Golden Dome prominently positioned in the upper left-hand corner. It was my “first” official rejection notice. With very polite wording the gist of the letter said, “Thanks… but no thanks.” Bummer! (But not a surprise.) The text in the letter went on to imply that perhaps I would be better suited for a less prestigious school closer to home and more conducive to my class rank.

When I mentioned to my mother, in a somewhat flippant tone, that Mr. Zuckerman apparently knew his business, she said without missing a beat, “Sit down and write what I tell you.” I soon sent a personal letter back to the admissions department at Notre Dame, not expecting much to come of this exercise in futility.

It wasn’t long before a second letter arrived adorned with the same golden embossed stamp. I must admit my heart rate indicated mild excitement. “Mr. Marchev, we applaud your tenacity, it read. “But still… no can do. However, to show you what good sports we are here in South Bend, we will put your name at the bottom of the wait-list.”

“Mom, you’re a genius,” I shouted… just before she instructed me to sit down and get ready to draft another letter. I forget my exact words, but whatever I wrote was enough to receive a third letter from the ND Admissions Department. This time it read, “Mr. Marchev, we are pleased to inform you that you have been invited to become an active participant in the class of ‘71 at The University of Notre Dame.”

If you want something bad enough, it is not in your best interest to accept an initial rejection or an apparent setback. Persistence and tenacity will, more often than not, win out in the end… if and when administered properly. In business, it is important that you first identify your goal or target. Then, without pause or excuse, continue to pursue your goal or target until you know, in no uncertain terms, that your time would be better spent elsewhere.

Note: I beat the odds and managed to gain entry into The University of Notre Dame. For a very good reason beyond the scope of this article, I never did go. If I have piqued your interest, shoot me an email and I will finish the story. But for now, adopt persistence as your middle name.

Take More Shots!
A former National Hockey League All-Star, Wayne Gretzky has been given credit for the phrase, “You miss 100% of the shot’s you don’t take.” This reminder, in and of itself, is quite logical. But if these nine words are not obvious enough, there are more ways to drive home this valuable message. Using golf as…
Getting Ready for Another Bumpy Ride
Fasten your seatbelts travel professionals. You are about to play a major role in a New Year consisting of successes, failures, challenges, wins, losses, good ideas, bad ideas, and a whole bunch of “head-scratching” scenarios that are sure to upset your stomach. You can also get ready to do a lot of smiling. And I…
The Day I Flew Around the Water Tower
If there is any truth to the belief that a good story is both entertaining and memorable, you are about to enjoy the information in my columns for the next few months. I am about to share with you my personal experiences that come equipped with some valuable lessons. The first of these lessons come…

Share your thoughts on “Welcome to The Class of ’71: My Notre Dame Story”